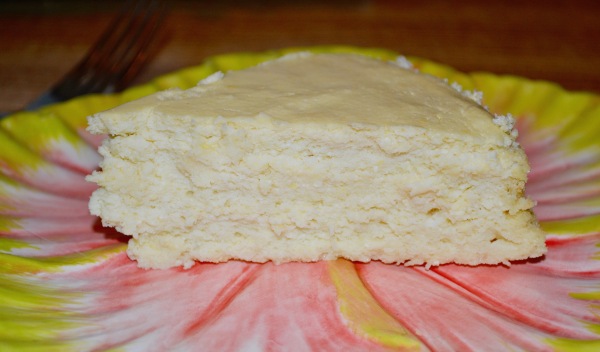 For the second cake that I had to (I don’t like baking at all, I was almost tortured!) make for my boyfriend since I lost a bet, he requested this European lemon cheesecake because, quite simply, he loves lemon and cheesecake, so the combination could only be delicious. The theory proved to be true! This cake was simple to make and although I genuinely had my reservations about this cheesecake due to the use of pressed cottage cheese (note: cottage cheese has always caused some slight disgust to me), it was excellent. Perhaps slightly too lemony for my taste, yet still highly enjoyable. The texture is perfect and similar to that of the classic cheesecake, but feels a bit fluffier and lighter. Essentially, this cheesecake eats itself and you don’t feel to guilty about doing it! Lemon lovers are sure to love this dessert.

Even though it was not expected for this European cheesecake, I did encounter the typical cheesecake problem of having a big crack develop in the middle. Since I did run a palette knife around the cake after taking it out of the oven and I let it cool completely before chilling it, the only other reason that I think may have caused the crack is that I may have over-whipped the egg whites. It may have been more of a stiff peak than a medium peak, which would have caused the eggs to deflate when the cake was cooling down. So be careful while whipping your eggs, but this is really the only sensitive step of the recipe. Enjoy!

Hello and welcome! I’m Valerie, scientist by day and baker by night. I always thought that baking is just like following a science protocol – follow the recipe and everything should work out fine! I am a food lover at heart and baking has always been a way for me to relax, have fun and express my love.