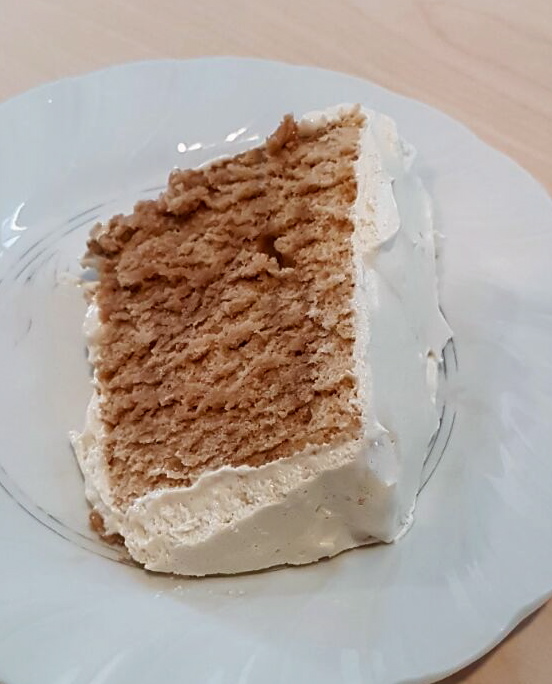 At my workplace we have this lovely tradition that when it is someone’s birthday, the person whose birthday it was previously is in charge of making or buying a cake for them. Since mine was two weeks ago I had the privilege and mission of baking a cake for my boss. Knowing that he is not a big fan of very sweet desserts, I thought that I would try this recipe for an Earl Grey chiffon cake. I had never made a chiffon cake before so was happy to try it. It was more time-consuming to make than I had expected, many more steps, but in the end I managed. Due to the fact that the egg whites have to be whipped and the tea-chocolate-lemon-dry ingredients mixture prepared separately, you should give yourself a good hour to make the cake. It is not a complicated cake to make per se, but the recipe requires some level of technical skills that have to be put to use. If you take your time and follow the recipe to the tea you should have no problem at all.

Once I poured the mixture into the tube pan I was a) excited somehow that the pan was ungreased and b) a bit doubting that it would work and that the cake would not remain permanently stuck to the cake pan. My cake took a bit longer to bake than the recipe recommends, about 60-70 minutes instead, but that may just be because of my inadequate and old oven. My favorite part of making this cake was spreading the sexy white, glossy maple meringue frosting onto the cake. What a delight! The frosting was delicious. Flavorful but not too sweet as many frostings are. The cake itself was also very good. A lot of flavors going on there, but not overwhelmingly so. You can definitely taste the Earl Grey tea and the lemon zest, while the chocolate and vanilla are more subtle. Very light and scrumptious cake; so much so that you won’t even feel guilty if you take two slices! I brought the cake to work the next day and it was faced with great feedback. Everyone loved it and claimed that it was the best cake I ever made. Even better than my carrot cake, apparently. I find that hard to believe, but this Earl Grey chiffon cake was indeed delicious. If you are looking to impress someone that is not a fan of too-sweet desserts, I urge you to try this recipe. As Anna herself mentioned in the cookbook, this is also one of my favorite recipes as of yet.